A few years ago before I got back to gaming I saw the much anticipated 'Enemy at the Gates'.  If you're not aware, this was a WW2 epic set in the battle for Stalingrad. 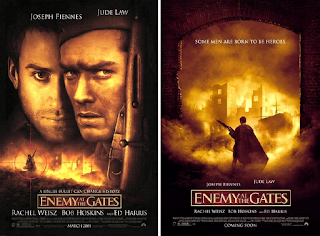 I didn't like it very much from the plot standpoint and the typical Hollywood rendition however its only saving grace was the eye candy.  Thankfully it had a big budget and no expense was spared to create a believable and immersive backdrop for an otherwise lackluster story line.  It had great sets, cinematography and featured actual tanks and equipment.  What caught my eye was the scene in the beginning were a troop train was on the way to Stalingrad.  It made a stop to exchange locomotives and I was hooked.


That was my first foray into MRR and I started doing research and discovered a whole new world for me to explore.  Here's a few examples of actual Soviet and German armored train cars used in various roles for the Great Patriotic War (WW2 eastern front).  This just barely scratches the surface and is just the tip of an immense iceberg of history, pictures and accounts of the war from the railroad perspective.

Armored trains have been around since the late teens up to the twenties of the previous century and was used extensively by both sides (Reds and Whites) of the Russian Civil War  during and after WW1.  Of course, the Russians weren't the only ones to use these monsters. 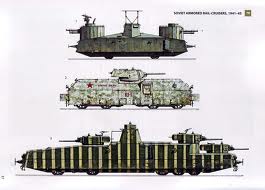 With all this colorful history, I knew that I had to start a collection but further searching frustrated my attempts.  I wanted miniatures and not models. Besides most models were larger in scale and only featured artillery rail cars.

I had a feeling that this was a very specialized field of interest and I had to narrow my search.  I also preferred Nscale (1/160) b/c of its close proximity to micro (1/285) aka 6 mm.  Although Zscale (1/220) is closer it is more rare than Nscale harder on my aging eyes.

So here's my collection of Nscale armored train cars and locomotive I had commissioned a few years ago by Ncentrities (a skilled modeller specializing in obscure military trains and models in other scales) while I was still in my 'wet Egyptian' phase. You know, "in denial." 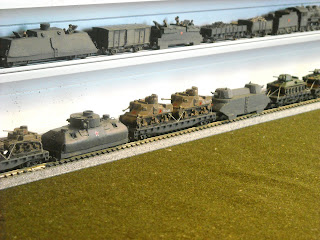 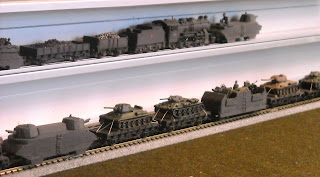 I'm so glad I finally got them out of storage and here's a few posed shots for fun.