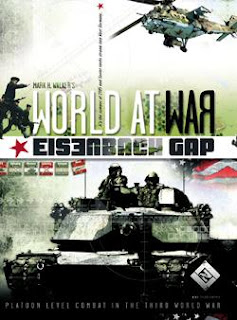 Turn 5 and 6 resulted in maneuvering: Soviets trying desperately to make their way north unmolested while the US are taking their toll on the lagging 1st Tanks and 33rd Motor Rifle.  1st Tanks is literally dead in their tracks.  The only effectives left are their recon contingent of 2 BRDMs, one armed w/a Sagger ATGM (right). 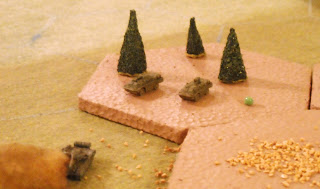 Fire is exchanged between a Delta Abrams but Ivan keeps missing.  The Abrams fires back scoring hits but are ineffective b/c these units were concealed and under cover on a wooded hill. 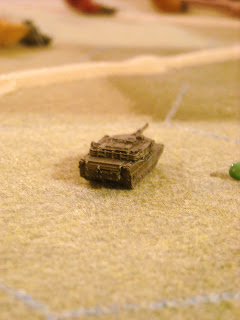 The action resumes as Alpha’s Bradley calls indirect fire for the M106 (right) dropping HE on the 33rd's two thin skinned BMPs destroying them as they try to pass the Eisenbach gauntlet. 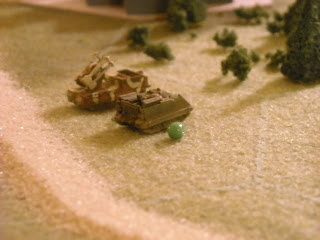 The rest of their company: 2 remaining T62 platoons and HQ (light blue bead) advance cautiously using all available cover, including the burning wreck of an Alpha Abrams.  They're safe for now. 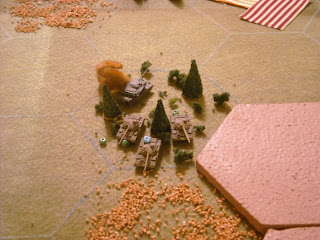 Waiting for them patiently in Eisenbach is a mix bag of a Delta Abrams platoon supporting Alpha’s HQ and Bradley platoon.

Meanwhile on the west side elements of the 87th (2x BTR60s lodaded w/ 2x Infantry Platoons) take advantage and make a dash for freedom thru the thinly held line by Charlie Company.  Score 4 points towards the Victory Conditions for the Soviets. 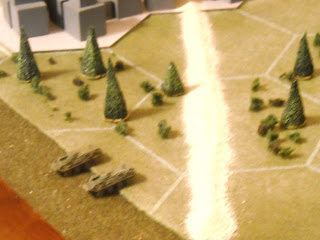 However the rest of the 87th aren’t out of the woods yet. 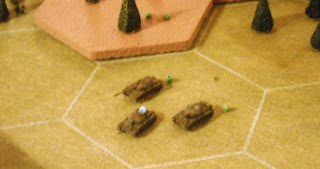 In fact one of their valiant T55s got caught out in the open to be the sacrificial lamb covering his comrades’ advance.  He will be awarded posthumously. 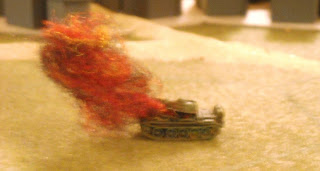 Turn 9 finds the remnants of 1st Tank (2x T72 and HQ) able to rally and move towards the position recently vacated by the recon element who's moved into Bergengipfel.  However, it’s too close for comfort and the deadly sharpshooter Abrams from Delta takes them both out. 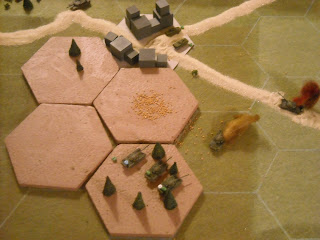 The Delta Abrams covering the right flank closes in to cut off the 87th‘s escape but misses terribly.  There’s hope for the Soviets yet even with their staggering losses. 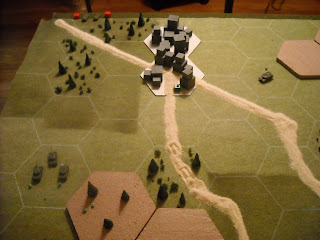 East side action finds Alpha Bradley moving from Eisenbach to a better spotting position in the woods to call down heavy mortar fire from the M106 to the hunkered down T62s of the 33rd. Damn! They missed as well. 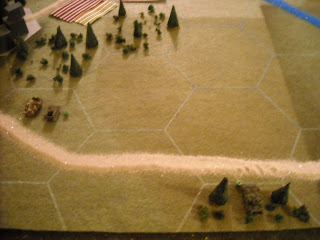 However, the T62s didn’t and exacted their revenge with overwhelming fire power which completely obliterates the foolhardy Bradley (burning on the horizon in the woods)!  Now the M106 (right) is temporarily neutralized, that is until the HQ can move and get a better bead on the bad guys.  I doubt if he’ll leave the safety of Eisenbach though. 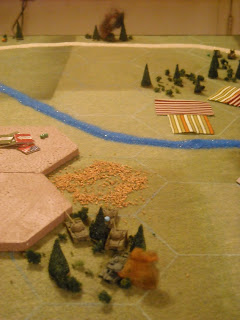 The 87th finally activates and races towards the finish line only to stop right at the edge.  Charlie’s 1st Infantry Platoon positioned in the woods (top right) was waiting for this exact moment and fires the Dragon aaaannnnd misses.  This depletes their ammo which means that two turns must pass before they can fire again. 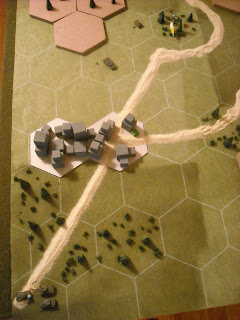 Charlie activates for the last time this turn and orders its 2nd Infantry Platoon on a desperate gamble: assault the enemy and stop them at all cost.  They're effort is all in vain.  They disorder the T55s at the cost to themselves. Turn 10, the Chit Draw gods smile upon the Soviets as the 87th activates first and promptly exit off the board for a costly Soviet win.
Posted by Herrodadog at 9:22 PM