A couple of months ago we had a game day dedicated to Napoleonic skirmishing using Willy's home brew rules. The following photos were taken by Mike. We all met at Willy's shop (our semi-official club house) and skirmished with his just completed Red Coats from Alban that was featured in his post: http://tacticalminiaturesgaming.blogspot.com/2011/04/more-alban-and-reinforcements-by-post.html

Terrain was a combination of Willy's mat from the Terrain Guy along with the road by an unknown manufacturer and selected pieces from my collection. Recognize the huts? Those were the medieval/dark age huts I scratch built for our future Viking campaign from an earlier post: http://thehistoricalminiaturist.blogspot.com/2011/04/viking-housing-development.html. Carpet tiles were used for the plowed fields along with my scratch built haystacks. The wooden kegs were acquired from the wood working section of my local craft store (i.e. Michael's, Hobby Lobby).

Opposing forces: a squad each of British and French (An officer, an NCO, 8 grunts) 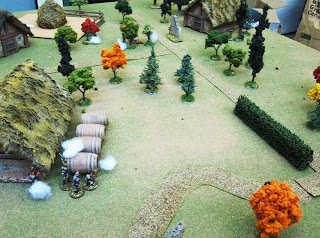 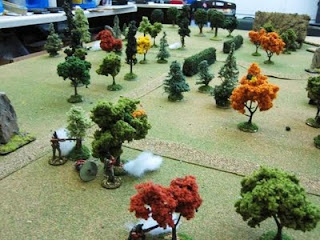 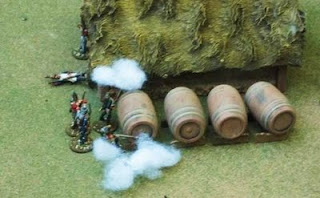 The Red Coats won that day but barely. The bad news: 70% casualties. The good news: survivors don't need to share the ale!
Posted by Herrodadog at 1:09 AM