Ah, sigh... yet another distraction has led me to an altogether different path(ology). The good news: I'm done, finito, abgeschlossen, completado. Just like that, badda bing - badda BOOM! Thankfully, it was a small enough project to complete in a few, short days.

Not to worry, b/c I'm still diligently working on my Vikings and SPOILER ALERT: my Moria Goblins have been done for sometime but I haven't staged them yet for their photo shoot. You know how they are. It's a real cast iron bitch trying to work with these idiots! I haven't gotten a call back or an email from their agent and they're such prima donnas... But I digress.
Since the completion of my buddy Willy's paper models of a western town in his blog post titled West World: http://tacticalminiaturesgaming.blogspot.com/2010/09/west-world.html I knew that sooner or later I'd have to paint me some bad ass bandidos to slug it out with an assortment of all comers: ornery critters, varmints and bushwhackers! I mean, come on, anybody who grew up in the 60s definitely had a steady diet of Westerns. Be it the Hollywood or the Spaghetti variety. 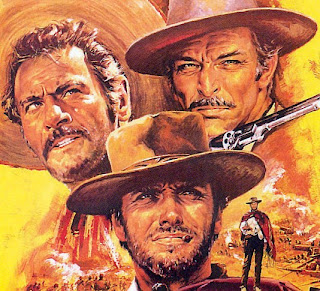 As a kid growing up in California, circa 1969, I was also bombarded with commercials that further reinforced the stereotype (all in fun, IMHO).
With that said, I've always been particular about colorful characters and unit types. Introducing Los Hermanos Volandos (The Flying Brothers). This is what happens when a mariachi band has gone bad(ass). After a few setbacks with bad managers and equally bad bookings the Brothers decided that crime does pay, at least, better than their musical gigs ever did. 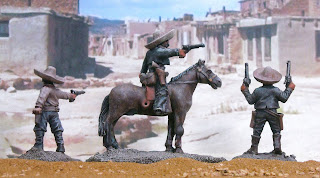 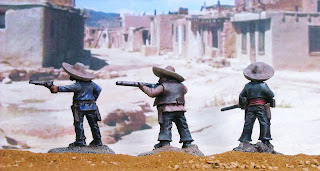 Some action shots using Willy's Western Town including his collection of Heroscape Cowboys and acquired Mexicans.
Eventually, I need to find and paint up a Chinese Tong (I've already checked TMP and haven't been satisfied with the results). Please, please, please, let me know if you have any suggestions.


Then, I recently made a *GASP!* discovery thru my never-ending, serendipitous surfing thru the web. The Apache band (not musical!) I'm hankering for is made by Black Scorpion and looks great. It's now added to my Wish List. Coming soon...
Posted by Herrodadog at 5:36 PM